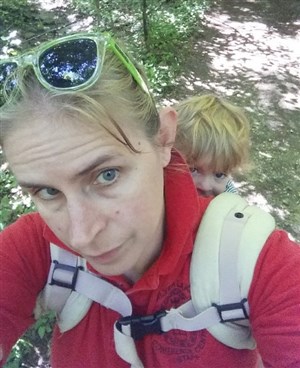 In this role, Kronholm Clark - who has been working as the camp administrator and registrar - will be the lead on hiring and guiding the summer staff and working to develop community with them. She will also continue to be a lead staff member with the volunteers (Deans, Counselors, Chaplains, Artists in Residence, etc.), and will continue to use her substantial gifts and skills with writing and marketing for SLCC.

"I am excited to have Jenn continue as part of the Silver Lake team and excited to grow this position to full-time and with one person making all the connections between volunteers and staff in the summer," said Silver Lake Executive Director the Rev. Ryan Gackenheimer. "We're looking forward to a great summer in 2018 with Jenn's new leadership and passion for Silver Lake and having that blossom even more."

Kronholm Clark began attending Silver Lake in 1988 as a fourth-grade conferee. She served five summers on summer staff and volunteered as a counselor in the 2000s. She returned to Silver Lake in the year-round administrator role in October 2011. Prior to joining the year-round staff, Kronholm Clark worked as associate editor at The Lakeville Journal and as research associate at The Hotchkiss School. She holds a Master of Arts from Trinity College and a Bachelor of Arts from Vassar College.

"I am really excited to take on the position of Program Director," Kronholm Clark said. "This new role will allow me to deepen the work I have been doing over the past six summers with the deans and counselors and to create stronger relationships with our summer staff. Having all of the pieces of the summer program under the same umbrella will allow Silver Lake to develop an even more robust, fun, spirit-filled program for our conferees."

Gackenheimer credited Munshower, who left the staff for a position at the University of Mississippi, with developing the summer staff director role and making it his own with his gifts and skills, including his music.

Silver Lake Camp & Retreat Center is a ministry of the Southern New England Conference of the United Church of Christ.
Click here to read our Mission Statement.