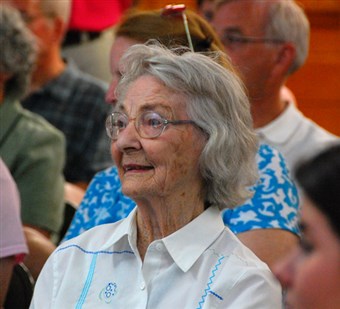 Ms. Weed spent much of her life in service to the United Church of Christ. In the 1950s, she was on the committee that purchased the former boys camp that is now the Silver Lake Conference Center, and she was instrumental in the formation of the union that resulted in the UCC. She served as camp nurse and counselor at Silver Lake for 17 years.

"She influenced and encouraged many of our clergy today," said Cecile Gilson, Executive Assistant to the Conference Minister. "She was passionate about the ministry of Silver Lake."

She was a member of the UCC Board of World Ministries, whom she represented in numerous trips around the world, and a delegate to the national UCC General Synod. She served as moderator of the Connecticut Conference UCC, and moderator of the First Church of Christ, Congregational in West Hartford, her home church for more than 50 years.

"She is lovingly remembered ... as a woman of leadership, vision and faith in the many capacities in which she served; and as a graceful and generous presence to the many who came to know and love her," said The Dr. C. Geordie Campbell, Senior Pastor of First Church.

Ms. Weed, who lived in Bloomfield, leaves behind a son, Christopher, of West Hartford, two grandsons, Jeffrey of Bloomfield and Jonathan of Thousand Oaks, Calif. and her beloved extended family.

Go to her obituary.

Silver Lake Camp & Retreat Center is a ministry of the Southern New England Conference of the United Church of Christ.
Click here to read our Mission Statement.